WKAR News
Celebrating Latinx Trailblazers
Michelle Jokisch Polo takes a look at trailblazing Latinos in the Capital Region. Listen to 90.5 and 105.1 during Morning Edition and All Things Considered Sept. 15-Oct. 15.

A Michigan Migrant Farmworker Fights For Legal Status In The U.S.

Claudia Duran is a Michigan farmworker advocating for a path to citizenship for undocumented workers like herself. WKAR's Michelle Jokisch Polo visited Duran and brings us her story.

Claudia Duran has just arrived home after her 12-hour shift at a blueberry farm in Allegan County. She’s still wearing her work clothes.

It’s been a hot summer day and, even in the evening, the air still feels muggy and heavy.

Her jeans have dark blue stains on them from kneeling on the ground to collect the fruit.

Duran has been working at this farm every summer for the last 18 years ever since she and her husband moved to Michigan from Mexico.

She is part of the more than 2 million migrant farm workers helping feed American households.

Undocumented farm workers like Duran make up nearly 50% of the agricultural workforce in the United States, according to data from the USDA Economic Research Service.

Duran said every morning she tries to get to work about 30 minutes before her shift begins at 7 a.m. to prepare for the day.

Duran also ties two empty plastic buckets to her waist with a thin rope. The buckets free up her hands while she works.

Duran was only able to pick 95 pounds of blueberries today. At 60 cents per pound, she came away with $57.

She works six days a week to make enough money to feed her family of five.

And while it was hot during the day, Duran said it can be even harder in the mornings when she first starts because of the weather.

“Its harder to pick the blueberries when it's wet and the temperatures are colder because my hands get numb," she said.

The nearly 100 pounds of blueberries she picked is only about half of what she could do on one of her best days at work.

“Everyone who is a migrant farmworker, or workers like us, earns less than those who have a social security number and can go work in factories," she said.

Duran works on the fields year round. She picks blueberries in the summer, apples and cherry tomatoes in the fall, trims Christmas trees to make wreaths in the winter and picks grapes in the spring.

“It’s hard. My body has grown tired over the years. For someone like me who spends time working through the cold, that damages your bones and you really start to feel it over time," she said.

"As an undocumented immigrant, I don’t qualify to receive insurance through my employer or anything like that."

Agricultural work can be exhausting and dangerous. Across the state, farmworkers can spend up to twelve hours a day harvesting crops in all types of weather.

Duran says she has suffered from malnourishment, dehydration and heat stroke.

This past year, work on the fields intensified for her.

As the coronavirus pandemic forced the closure of business and schools, farm workers across the country were deemed essential. Their work didn’t stop.

During the height of the pandemic, Latino workers employed in the food production or agriculture industry were more likely to be infected with COVID-19 compared to non-Hispanic workers in those industries, according to research from the Center for Disease Control and Prevention.

In Michigan, it wasn’t until five months into the pandemic that an emergency order was put in place requiring regular COVID-19 testing and personal protectiv equipment for agricultural and food processing employees.

Undocumented farm workers pay taxes and contribute to the economy, but because of their lack of legal status, they constantly face the fear of deportation.

In March, lawmakers introduced the bipartisan Farm Workforce Modernization Act into Congress. It’s a comprehensive proposal that would lay out a path to legal status for undocumented farmworkers like Duran.

She believes her community has earned the right to receive legal status.

That's the message she tried to convey when she shared her story at a Senate Judiciary Committee hearing in July.

“For one of us to go and tell them all the difficulties we have faced, and share my testimony, and urge them to give us legal status and to listen to us," she explained.

The Senate and House have approved a $3.5 trillion budget resolution that includes more than $100 billion to create a pathway to citizenship for undocumented migrant farm workers. Duran said she thinks things are moving in the right direction.

By this time next year, she hopes to have legal status, so she can go home to Mexico and visit her parents. She hasn’t seen them for nearly two decades. 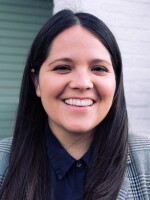 Michelle Jokisch Polo
As WKAR’s Bilingual Latinx Stories Reporter, Michelle reports in both English and Spanish on stories affecting Michigan’s Latinx community. Michelle is also the voice of WKAR’s weekend news programs.
See stories by Michelle Jokisch Polo
Sep. 15-Oct. 15
Celebrate and explore Hispanic Heritage with WKAR
EXPLORE
News from WKAR will never be behind a paywall. Ever. We need your help to keep our coverage free for everyone. Please consider supporting the news you rely on with a donation today. You can support our journalism for as little as $5. Every contribution, no matter the size, propels our vital coverage. Thank you.