Thursday marks the 75th anniversary of the United States invasion of Normandy in the Second World War.

Ninety-five year old veteran, Bill Root was in the Navy. He served as a radar maintenance officer in the Pacific  Theatre. Root has conflicting feelings on the use of nuclear weapons against Japan. In August 1945, the US dropped atom bombs on Hiroshima and Nagasaki, precipitating Japan's surrender and the end of the war.

Two days after the D-Day invasion, Root's brother was killed in action. He remembers his brother by visiting Normandy any chance he can get. Through his brother's death, he became more interested in what really happened. 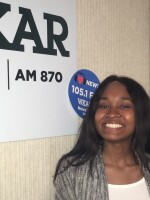 Tamia Boyd
Tamia Boyd helps gather news content for online and on-air.
See stories by Tamia Boyd
Related Content
WKAR relies on individual support to pay for the news coverage you value. Make your first monthly contribution of $7 or more towards the journalism you rely on. Donate today!
DONATE