Roxann Wilkinson is giving one of the dogs at the Ingham County Animal Control and Shelter a treat. Cressie is a 2-year-old mixed breed with a shiny grey coat.

“Cressie was adopted and returned because the apartment complex said she looks too much like a pit bull,” Wilkinson said.

In Ingham County, pit bulls accounted for about 8% of registered dogs in 2021. But that number could be larger because shelter staff say the breed is voluntarily reported by the owner.

Dr. Maria Iliopoulou is a veterinarian at St. Francis Veterinary Housecall Services. She said the types of dogs that can be considered pit bulls are broad.

"Pit bull is a definition for a mixed breed dog practically.”

Ingham County’s Animal and Control Shelter takes in thousands of pit bulls each year. Wilkinson is the shelter's Behavior and Enrichment Coordinator. She also volunteered at the shelter for more than a decade. She estimates Ingham County receives 5,000 dogs per year. Of those, two-thirds are pit bulls.

As shelters continue to see so many of the breed, some advocates say legislation could change that trend.

In Michigan, at least 37 municipalities have bans or restrictions on pit bulls, and many apartment complexes won’t allow them as pets.

That leads to more pit bulls ending up in shelters.

"The more you have of something, the more likely that thing is going to be a victim of circumstance. And in this case, the pit bull-type dog ends up in all kinds of situations because they're so easily accessible,” Franklin said.

Franklin adds pit bulls have also had a poor reputation because of media portrayals dating back to the 1980s, when dog bite attacks started to become more sensationalized with the 24-hour news cycle.

"Now we have social media, we have all these different ways that people can not just make an allegation about a certain kind of dog, but then that story then continues 300 times if it has the term pit bull in it, which gets people's attention, and it just keeps going, and it gets out of control pretty fast,” Franklin said.

And Iliopoulou says any dog, regardless of the breed, will be more aggressive if the animal doesn’t get proper care and socialization.

"What did you do for your dog to have the basic requirements for animal welfare? You know, do you provide food? Do you provide water?” Iliopoulou said.

Now we have social media, we have all these different ways that people can not just make an allegation about a certain kind of dog, but then that story then continues 300 times if it has the term pit bull in it, which gets people's attention and it just keeps going and it gets out of control pretty fast

Deirdre Franklin, Co-author of the book, "The Pitbull Life"

Some say protections should be put in place so mixed breed dogs like pit bulls are treated better.

Currently in Michigan, legislation only exists to determine what can happen to a dog after an attack, like a court asking an owner put up a fence around their property, sterilize their dog or have an ID tattooed on their pet.

McCann has introduced a pair of bills focused on addressing concerns from community members before a dog attacks.

"The bill basically sets forth a structure for legal authorities [and] courts, to intervene with a situation that's been brought to their attention in the case of a dog that could cause really potentially devastating harm,” McCann said.

This way, steps can be put in place so there’s less of a risk of owners having to surrender their pets.

"You have to have this dog tethered, or you have to have a fence erected, or I have to receive no more complaints from the mail carrier,” McCann said.

Iliopoulou said she’s on board with making dog owners more responsible for their pet’s care but said McCann’s legislation needs to be crafted in a way that doesn’t punish the dog.

"Eventually the dog is gonna pay for, you know, not being raised appropriately or not being, you know, protected. So, we don't want to put the dog in circumstances where they're going to bite or they feel they have to protect us to protect our property,” Iliopoulou said.

McCann responded to criticism about the dog's punishment in an e-mailed statement:

"The legislation provides an avenue for authorities to ask a court to intervene before a potential tragedy occurs. What a court may determine as a remedy for a specific situation would be up to a particular judge—they would need to consider all the facts, testimony, and best recommendations before issuing an order that is up to a judge's discretion."

People just need to give them a chance. Come and meet one. I have some of the snuggliest pit bulls ever

Back at the shelter, Wilkinson encourages people to stop by and meet other dogs like Cressie.

“People just need to give them a chance. Come and meet one. I have some of the snuggliest pit bulls ever,” Wilkinson said.

But she said, there’s still work to be done to make sure these dogs don't end up in shelters in the first place. 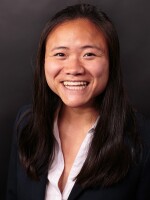 Megan Schellong
Megan Schellong is the local host and producer for Morning Edition on WKAR.
See stories by Megan Schellong
WKAR relies on individual support to pay for the news coverage you value. Make your first monthly contribution of $7 or more towards the journalism you rely on. Donate today!
DONATE