Politics & Government
Capitol Connection
From our State Capitol in Lansing to the U.S. Capitol in Washington, DC, WKAR is committed to explaining how the actions of lawmakers are affecting Michiganders. Political and government reporter Abigail Censky leads this section. There are also stories from Capitol correspondents Cheyna Roth, Rick Pluta and the Associated Press. As the 2020 presidential race begins, look here for reports on the role Michigan will play in electing or re-electing the president.

Early Monday, the U.S. Supreme Court struck down a lower Michigan court’s decision that would require lawmakers redraw gerrymandered district and congressional lines before the elections in 2020. WKAR's Politics Reporter Abigail Censky spoke to Riley Beggin, Bridge Magazine's politics reporter about the decision and it's implications for Michigan. Below are highlights of their conversation.

Not A Federal Decision Says SCOTUS

In April, a federal district court ordered lawmakers to re-draw lines ahead of the upcoming elections. Now, policymakers don’t have to.

“What this decision is formally putting to bed, this lower court decision that would have ordered the legislature to redraw a bunch of district lines and then hold special elections in 2020 for Senate seats, and run these new elections under new lines in 2020.”

This decision came as no surprise to politicos in Michigan after the Supreme Court decided this summer that federal courts do not have the power to make a decision on partisan gerrymandering. This leaves the states to litigate redrawing lines on their own.

“Earlier this summer when the Supreme Court decided that federal courts actually don't have a say in political gerrymandering cases, the lines as they are will stand through 2020 and Republicans don't have to make any changes.”

In Michigan, instead of the leaders of the majority party drawing lines, for the first time an independent, citizen-run redistricting panel will create the new lines thanks to a 2018 vote that established an independent redistricting comission. Guidelines for applying to be on the comission were released by Michigan Secretary of State Jocelyn Benson this week.

“Democrats and Voters Not Politicians, the folks who are kind of behind this redistricting commission that is going to change the way that we draw district lines, other sort of good government groups were really mad. Experts in gerrymandering were really mad. They said this was a bad decision. You know, Republicans and the folks who have had a hand in drawing those lines and have kind of said from the get-go, you know, 'We disagree with the decision that these are gerrymandered. These are fairly drawn and we stand by it.' You know, they felt vindicated, and they were happy with that decision.”

Thirteen people will serve on the redistricting panel. Four people from each major political party will be on the panel in addition to five who have no political affiliation. For the first half of every decennial census year (2020, 2030, etc.), applications will be open to citizens to sign up and volunteer. After the applications have closed, the Michigan Secretary of State will choose 60 Democrats and 60 Republicans in addition to eighty self-identified Independents.

Michigan legislators will then cut 20 applications from the pool, narrowing the field to 180 people. Out of those left, four Democrats, four Republicans, and five independents will be randomly selected to serve on the panel.

“2022 will be the first year that we vote under new redistricting lines through this commission. So that's moving forward, the process of putting that together is moving forward. But there are two cases led by Michigan Republican Party and the Michigan Freedom Fund to shut that down, they argue that it's too exclusive. Essentially, there's some pretty strict rules about who can and cannot be on the commission and they say, you know, that's actually unconstitutional.“

For now, the saga of gerrymandering in Michigan will continue until 2022, when elections are held using the new lines drawn by the redistricting panel. 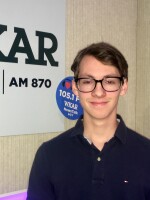 Alec Gerstenberger
Alec Gerstenberger gathers news photographs and helps add online content to wkar.org.
See stories by Alec Gerstenberger
Exploring Nature
Celebrate the amazing outdoors this month with WKAR!
LEARN MORE
Related Content
News from WKAR will never be behind a paywall. Ever. We need your help to keep our coverage free for everyone. Please consider supporting the news you rely on with a donation today. You can support our journalism for as little as $5. Every contribution, no matter the size, propels our vital coverage. Thank you.
DONATE